Generally Partnerships firms opts for conversion into a LLP to avail  the following benefits:

There is no limit to the number of partners in a LLP; a partnership willing to have more than 20 partners can benefit through this.

LLPs provide limited liability status to its partners and offer the flexibility of internal arrangement through an agreement between the partners.

LLPs give entrepreneurs and businessmen a more structured business vehicle compared to a sole proprietorship or a conventional partnership.

It provides the flexibility of controlling the business operation in accordance with the partnership agreement whilst enjoying the limited liability status compared to a company which is subject to stricter compliance requirements under the Companies Act 2013 in most of its affairs.

LLP is a business vehicle which offers simple and flexible procedures in terms of its formation, maintenance and termination while simultaneously has the necessary dynamics and appeal to be able to compete domestically and internationally.

Now, multidisciplinary LLPs are allowed wherein professionals of varied disciplines can work together which is an exclusive advantage of LLP

LLP structure is also suitable for PE funds, joint ventures and venture capital funds which is not the case in partnership form

LLPs can enter into compromise, arrangement, merger or amalgamation with other LLPs whereas partnerships cannot merge with other firm

Who can be a Partner in an LLP

A “body corporate” or "corporation" includes a company incorporated outside India, but does not include—

(ii) any other body corporate (not being a company as defined in this Act), which the Central Government may, by notification, specify in this behalf;

an individual shall not be capable of becoming a partner of a limited liability partnership, if –

(a) he/she has been found to be of unsound mind by a Court of competent jurisdiction and the finding is in force;

(b) he is an undischarged insolvent; or

(c) he has applied to be adjudicated as an insolvent and his application is pending.

Trust or a Trustee

General Circular No. 37/2014, dated 14th October, 2014, clarified that the trustee being a body corporate and representing a trust in case of “Real Estate Investment Trust” (REIT) or “Infrastructure Investment Trust” (InvITs) or such other trusts set up under the regulations prescribed under the Securities & Exchange Board of India Act, 1992, is not barred to hold partnership in a LLP in its name without the addition of the statement that it is a trustee.

a. Print the new LLP Agreement with new Certificate of Incorporation.

b. Alter the name plate affixed on the outside of every office or place in which its business is carried on and also include, along with its name, the former name or names so changed during the last two years. (Eg: ABC LLP (formerly ABC Private Limited) or XYZ (OPC) Private Limited (formerly XYZ Private Limited))

f. Alter the hundies, promissory notes, bills of exchange and such other documents and also include, along with its name, the former name or names so changed during the last two years. Eg: ABC LLP (formerly ABC Private Limited) or XYZ (OPC) Private Limited (formerly XYZ Private Limited))

Consent of all partners to convert into LLP

All partners of the partnership firm shall become shareholders of the company in the same proportion in which their capital accounts stood in the books of the firm on the date of the conversion.

Every partner has to contribute to the LLp

Steps for Conversion of Partnership into LLP 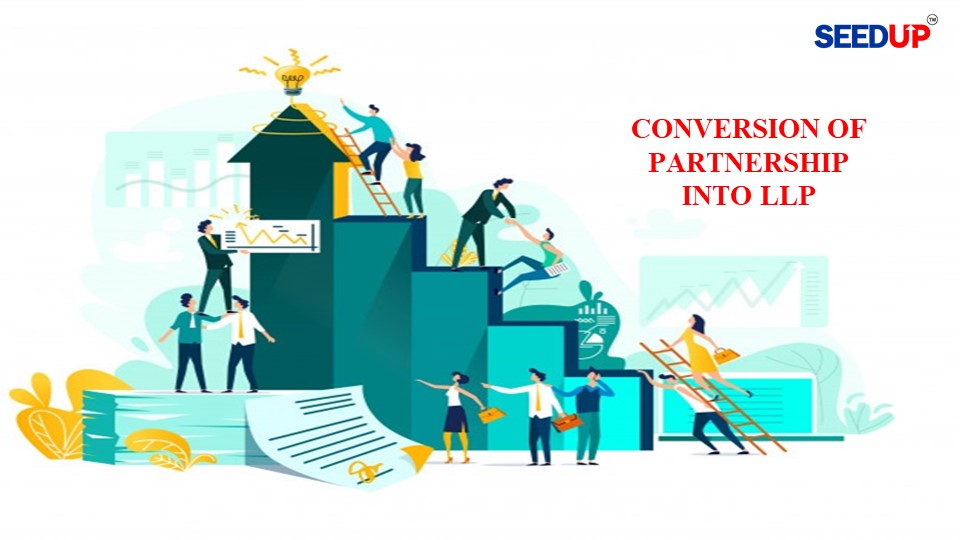 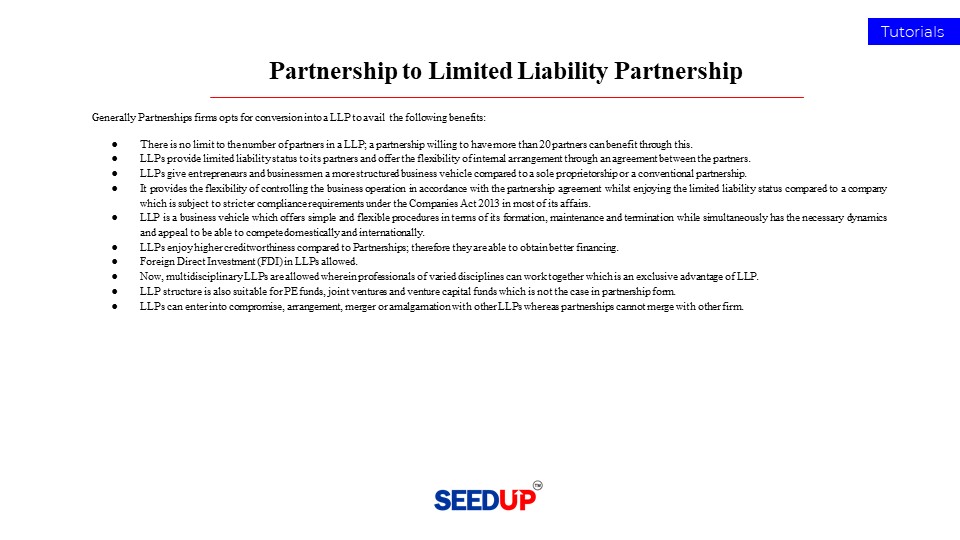 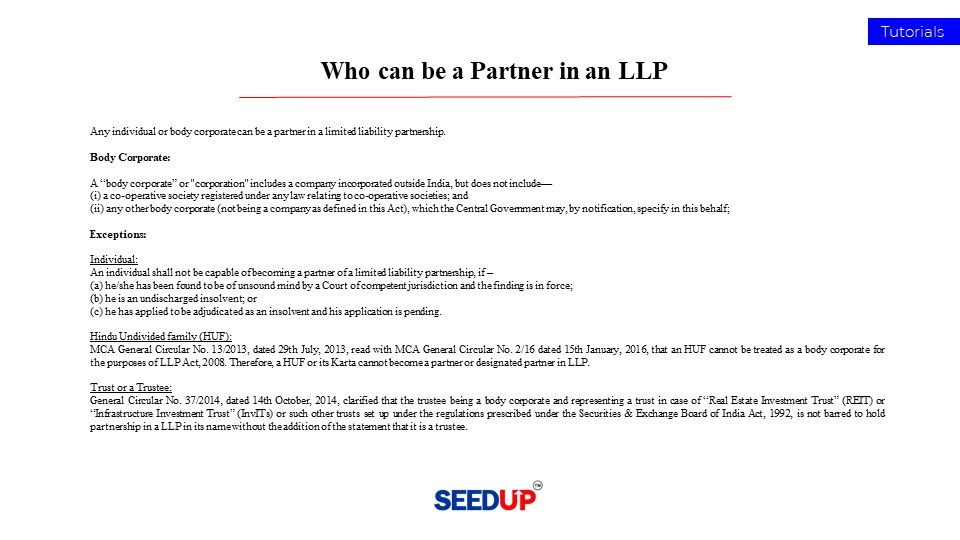 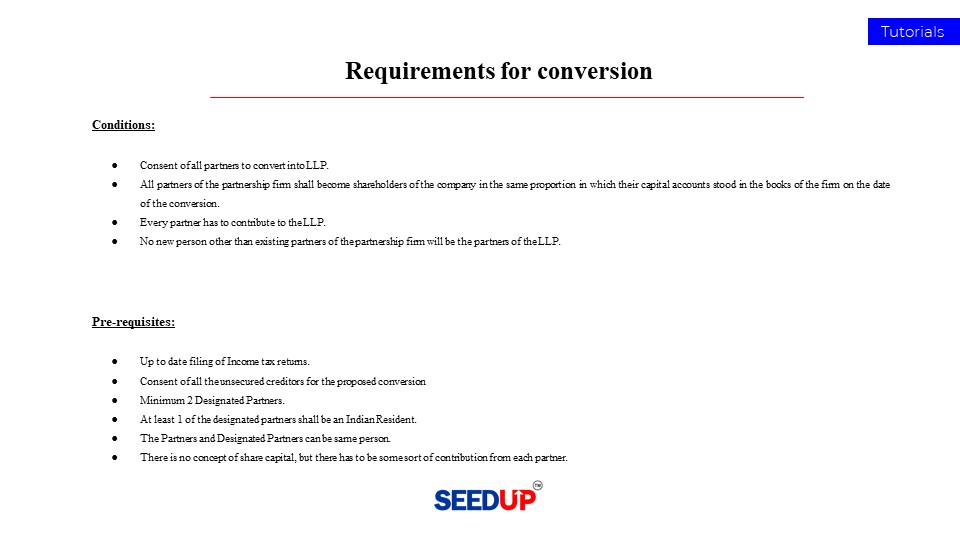 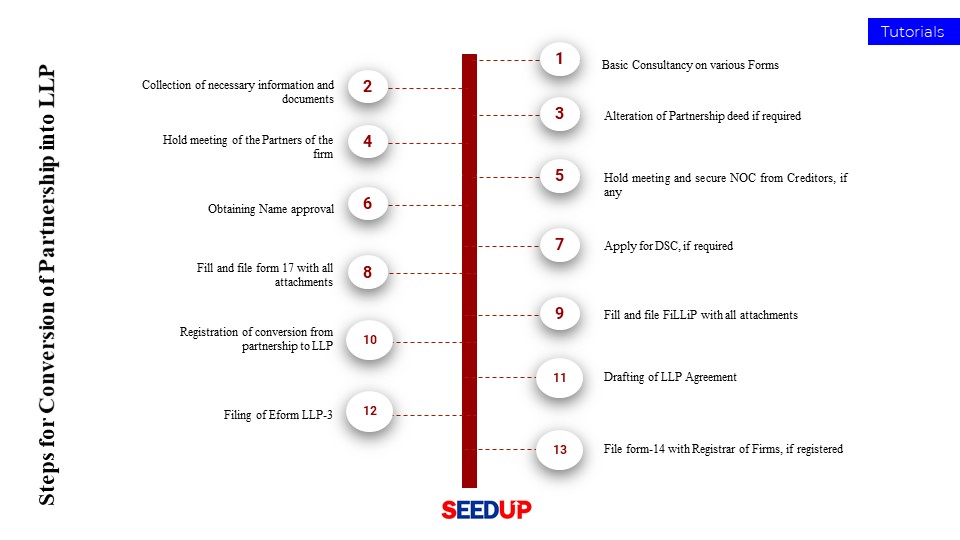 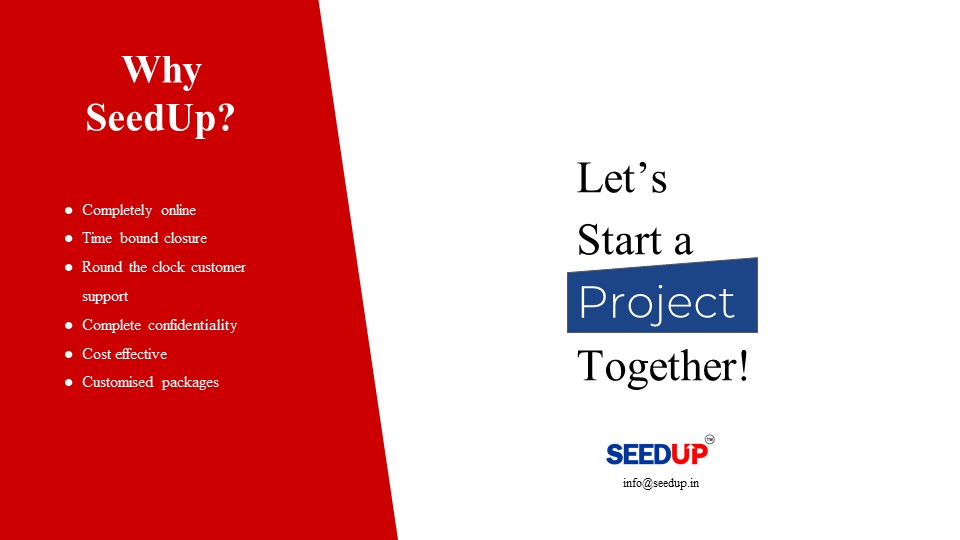